THE VOICE ANNIVERSARY
Do you have a little music-loving artist at home? His birthday is coming up? To please him and be in tune with his passion, we suggest you organize a birthday The Voice ! If you need help with the preparations for the birthday party, My Little Day will be happy to be part of your team! We have already planned everything with the retroplanning that we offer you!
See +

The essentials to plan for an unforgettable The Voice birthday!

J-25 This year, Louison is 11 years old and she is fascinated by rock stars. I find her a bit young for a party and I don't feel like spending the night with 8 girls invited to their first pajama party so we're going to have a party in between and the theme is: The Voice!

J-25 Faced with the growing excitement of the whole family, we are drawing up the list of participants in the birthday contest so that they have time to prepare their performances...

J-24 And the first observation is without appeal. We must take care of the invitation cards! First dilemma: ready-made invitations (perfect when you have little time) and invitations to make yourself (when you have plenty of time). And that's good, I thought I'd start painting on porcelain... So I decided, in agreement with my rock star daughter, to make DIY boxes. It will be an invitation to the casting of "The Voice kids"! Info to highlight: 18-21pm / dress up as a rock star / know a song by heart!

J-22 I find out about the system of the show. I'm watching all The Voice 2017 replays, because being more of a Star Ac' generation, the concept escapes me a bit. After watching, I realize that the show is divided into several stages: blind auditions, duels, the final audition... I begin to imagine what it could look like. And it won't look at all like the set of the TV show that I don't like, but then not at all!

J-14 REVELATION - Panic and hot flashes! I realize, too late, that I forgot to buy little gadgets and treats to put in the surprise bags. And here we go again for an order… Tattoos, erasers in the shape of guitars and rings that light up at night (glow in the dark). I'm adding to my selection a range of letter balloons to write THE VOICE! Add to basket: click, order: click!

J-14 Note to self: make a list of all the things to do next year before placing my order...

J-10 I wonder if I am Nagui or Nikos. Because well, from The Voice to Don't forget the lyrics, there is only one step and I have a better command of Nagui. It must be said that I listen to France Inter a lot. Ok, I digress. So I'm Nikos, that's for sure, I have to. Besides, Nikos is a rock star, a real one. He has a double at the Grévin museum! So, it will be white shirt, black tie and tuxedo and I almost forgot the essential detail: the self-tanner!

J-7 Preparing the playlist, printing the list of games and activities, shopping list (mini pizza, mini burger, mini croque, all at Picard), choosing songs for karaoke, creating the cocktail menu, borrowing 'a retro-project (my best friend's is great)… All the boxes in my memo are completed! I'm like wine, I get better with age.

J-1 at night in my kitchen. I'm working on creating my birthday cake. I had first thought of making a cake in the shape of a disco ball, but let's be honest, I couldn't compete in the competition for the best pastry chef this year so I'll keep it simple: a basic cake in the shape of a star and preparation cocktails.

J-1 at night in my living room. I install my decoration. Finally the bulk of my decoration. Stage atmosphere at the Stade de France the day before Johnny's concert. Atmosphere, that makes me want. First, I move my dining room table and stick it against a wall. I turn it into a buffet table by covering it with one or two metal curtains. I install the remaining metal curtains to transform the room into a stage. I hang my disco balls in the middle of the room.

The essentials to plan for an unforgettable The Voice birthday!

9h Louison decided to wake me up singing. She bets everything on Italian music. She thinks that as a good outsider, she can score points. She whispers in my ear Because Marguerite is beautiful by imitating Riccardo Cocciante. I remind him that I am not Mika, I am Nikos, but that I still have an ear and that therefore, I advise him not to bet everything on Ricardo, that it is an inconsiderate risk!

9 hours Disheveled hair, dark circles down to my chin, I gather my courage and stand up. Coffee-toast-coffee.

9 hours One last coffee. I see it more and more clearly. I should have called a professional makeup artist.

9 hours - I entrust my daughter with the delicate mission of inflating mylar balloons in the shape of silver stars with helium. It fills the ceiling. Only the disco balls protrude.

12 h We go out for an exhibition, the services can wait. This is the advantage of the birthday at 17 p.m.!

16 hours I set up two armchairs on wheels (which I borrowed from the office) in front of the space covered with silver curtains which is the stage. I direct the light towards the disco balls. I make the final settings for music, soundtrack, wall projection, Spotify…

16 hours The trickiest moment of the day. I turn Louison into a rock star. She will be David Bowie!!!

17 hours Arrival of the two coaches. I chose them because:

1 - they love my daughter

2 - they have no children

3 - they have an excellent musical ear

6 - the other looks like Pascal Obispo (ahahaha) (don't tell me you don't have a bald friend..)

18 h They are all here!! 12 formidable competitors, dressed in lights, ready to go to the grand finale of The Voice!

18 hours Hello everyone, I do not introduce myself, you recognized me! Well, ok, let me introduce myself, I'm Nikos! So, I am both presenter and room manager - singer in my spare time - And seriously, you did not recognize the legendary jury The Voice?

18 hours Before starting the contest, you will make your microphones! Like that each his own!

18 hours Okay, we're going to do the blind auditions. You are all going to sit on the sides of the stage on either side and make the public. I will call you and you will pass one after the other in front of the coaches. If one of the two turns around, you will go to their team. If the two turn around, you will have to choose your side. At the end of your auditions, one of the coaches will choose you. Don't forget that you are being filmed (my husband is an I-phone cameraman, he is behind the coaches' chairs) and that the performance will be broadcast live. Here we go, give the best of yourself!

18 hours I know you're nervous, but you'll be fine! You can take the lyrics with you! Louison, you start! I ask you for a round of applause for Louison! Louison, what are you singing? Do you need music to accompany you where you sing a cappella?

19 h You are super strong. Everyone join your coach. To decide between the teams, we are going to have a choreography competition. Yes, I know, we're not dancing with the stars, but to win the battles, stage presence is as important as your voice! With your coach, you will choose a song and prepare the choreography. See you on stage in 20 minutes!

19 hours I invite Mika's team to sit down, Pascal Obispo's to prepare and the coaches to settle down. A round of applause for Pascal's team!

19 hours Congratulations to all ! You all deserve a cocktail and petit fours. Join me in the dressing rooms! (During the break, don't hesitate to discuss everyone's performances.) (This is the moment when the cameraman turns into a bartender (the idea for the job is to be clearly multi-hatted).)

19 hours Well that's not all of that, but it's going to be time to decide between you! And for the duel, I offer you a two against two karaoke contest! And yeah ! It's very simple, I'll play you a song you know and you post the lyrics on the wall. The first part will be sung by the 1st competitor and the 2nd by the second. At the end of the song, your coach chooses the best! I leave 5 min to each of your coaches to determine the dueling pairs!

19 hours OK here we go ! (I discreetly ask the cameraman to heat the oven and fill the plates with mini-pizzas, mini-burgers, mini-croque-monsieur.)

20 hours Well, it was hot, but it was good. There are 6 finalists left! And for the final audition: Air Guitar! As I am not bad, you will all pass! Do you know what that means? Your performances will be filmed and voted on by my friends on Instagram. Whoever wins the most votes will be the big winner The Voice!

20 hours You all deserve a drink, a burger, a slice of pizza, a croque-monsieur and one last cocktail! (It goes without saying that the cameraman again went through different transformations.)

20 hours Well, it's still a birthday, we open the presents?

21 h Hi guys! If you're like me, all of your daughter's parents and friends are your friends, so you don't have to kick everyone out. Kids, it's time for The Voice, y'all can go watch TV. The big ones, a little cocktail?! I made you a special card!

22 h It would be a shame not to take advantage of your retro-project and your disco balls. A little karaoke? Just a warning, tell your girlfriends to watch out for Pascal, he's easy to flirt with. Well at the same time, his reputation precedes him…

Friend's advice : do not hesitate to visit our blog section dedicated to The Voice. You will find some ideas for animations. 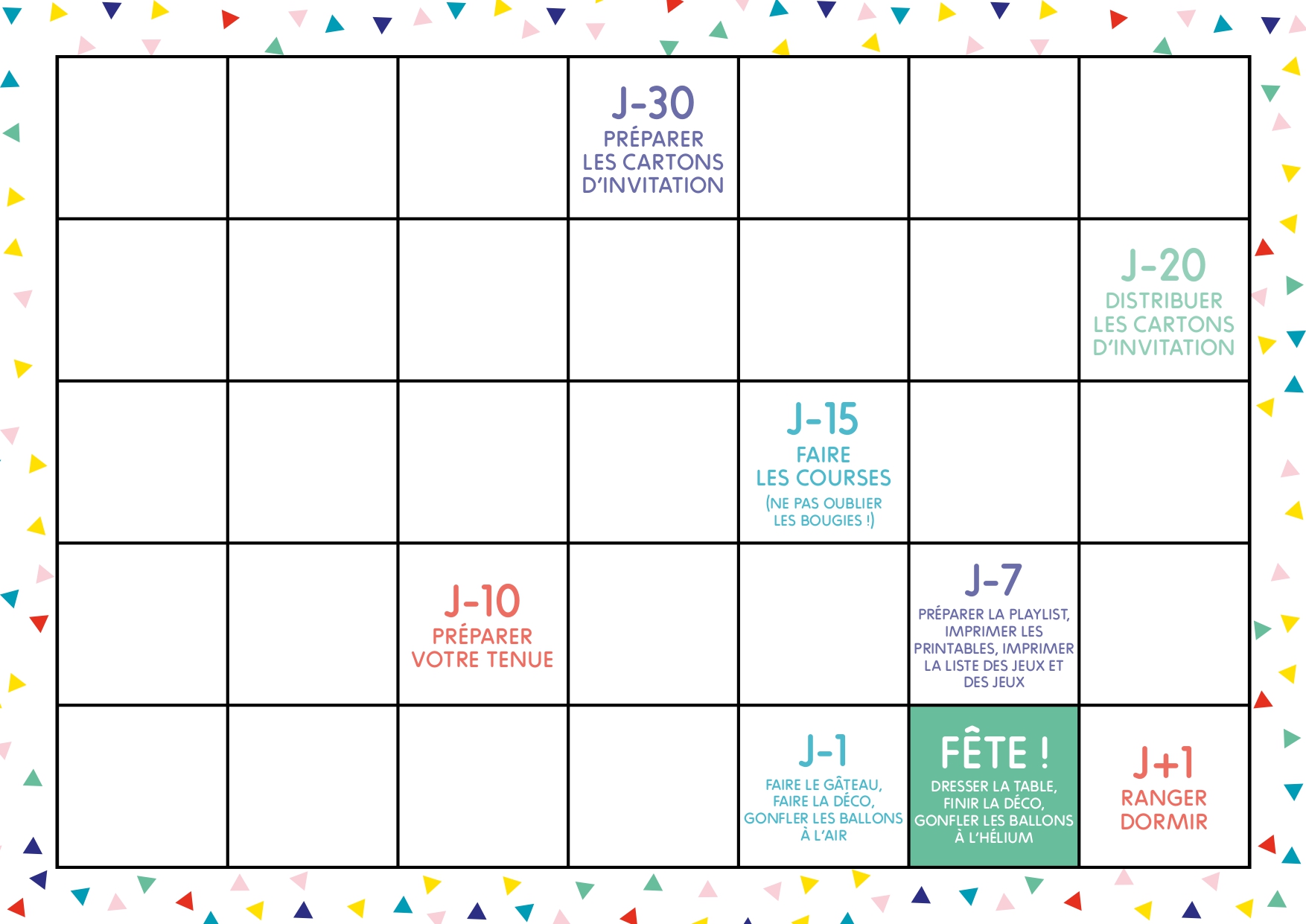 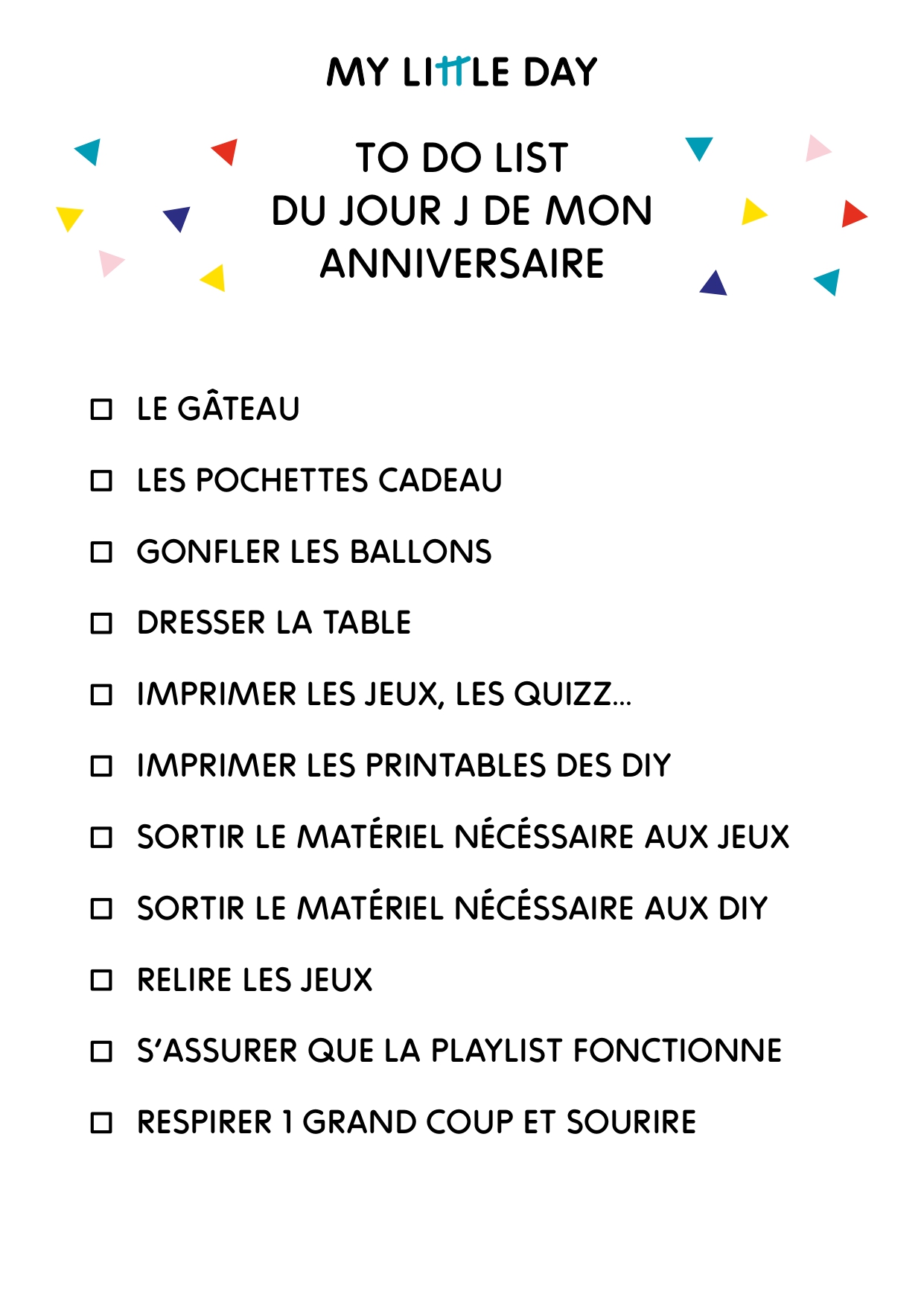 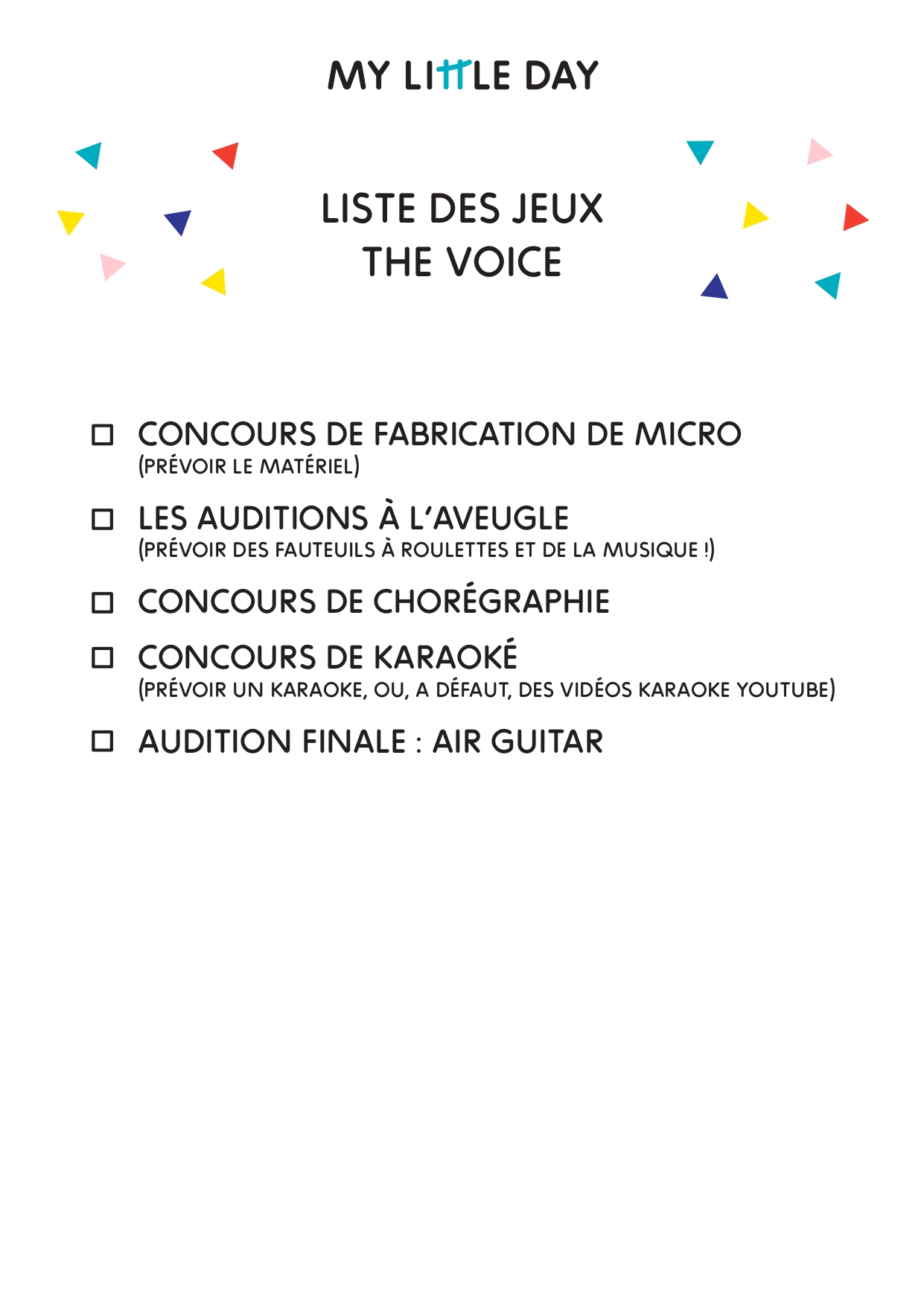